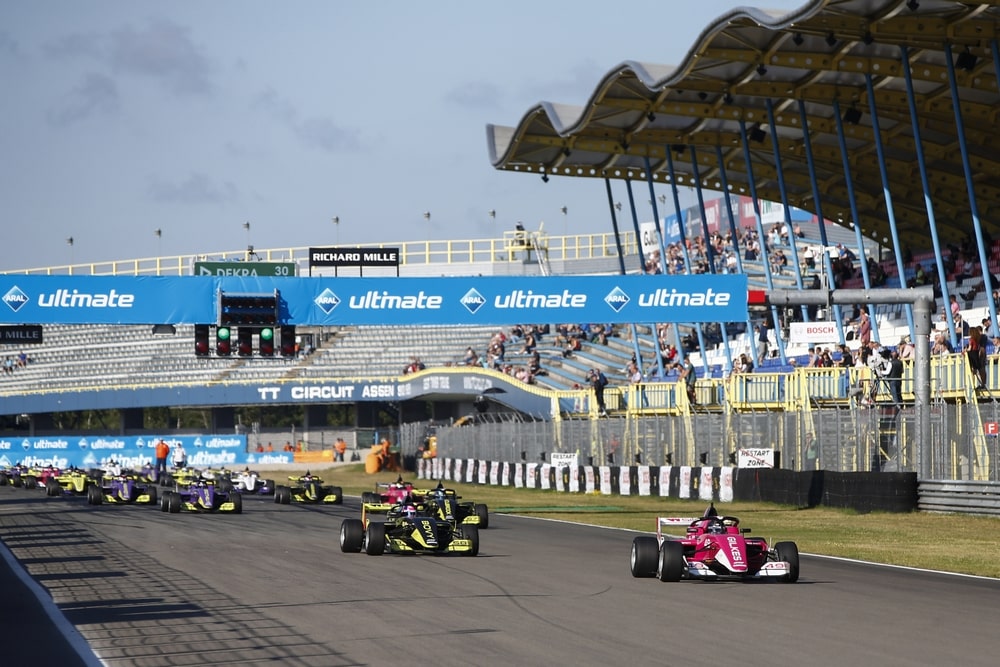 Megan Gilkes collected her first win in the W Series’ experimental non-championship race. It was a thrilling photo-finish won by the slightest of margins as Alice Powell applied the pressure late in the race.

The experimental race did not award drivers any points. The grid position was determined by the reversed championship position. The series’ two reserve drivers, Vivien Keszthelyi and Sarah Bovy were also allowed to participate in the race.

Megan Gilkes was all alone heading into the first corner, after getting a fantastic launch from pole position. Sabre Cook also had a brilliant start, slotting into P4 after overtaking multiple cars on the grid. Sarah Bovy had a horrific start from the front row of the grid.

Five minutes into the race, Jamie Chadwick had recovered five positions after starting from the rear of the grid. She began to battle with her championship rival Beitske Visser, but Visser defended hard.

Chadwick took Visser around the outside of turn 11, potentially getting a small nudge by Visser. This gave Chadwick the inside line for turn 12, but Visser didn’t give up. Chadwick ran to the outside line and the two were wheel-to-wheel down the straight. Chadwick lost out when Fabienne Wohlwend managed to overtake her in the chicane.

As the halfway point of the race, Alice Powell and Vivien Kesthelyi collided in the chicane in the battle for P4. Kesthelyi spun in the first corner when she ran wide onto the rumble strips, dropping to the rear of the field.

The following lap, the safety car was deployed when Shea Holbrook beached herself in the gravel. She was too aggressive on the outside kerbs and lost the rear of the car. The safety car bunched up the cars, nullifying the top three’s big lead.

The race restarted with 10 minutes remaining. Gilkes’ restart was not as quick as Bovy’s. The Belgian challenged the Canadian into the first corner. Both of them ran wide off the circuit. They were side-by-side into the second corner and down the straight leading into turn 8. Gilkes was able to remain ahead. Bovy ran wide into turn 11, losing a position to Cook.

Jessica Hawkins was able to dive up the inside of Bovy in the first corner a little later, sliding into a podium position. Hawkins applied the pressure on Cook, getting it done in the inside of the chicane. Powell was also able to get past Bovy, despite a slightly damaged front wing from the clash with Kesthelyi just prior to the safety car.

At the restart, Visser also lost out to Chadwick. Visser appeared to make contact with Esmee Hawkey into the first corner, spinning her around. Both Visser and Chadwick had to run wide to avoid the obstacle, but Chadwick rejoined the circuit in front of Visser.

A second safety car was deployed to remove the stricken car of Gosia Rdest from turn five, just over six minutes from the end of the race. Rdest was struck from behind by Bovy while braking for the corner, spinning into the gravel trap. Wohlwend also spun at the same corner in a separate incident.

The second restart went a little better for Gilkes than the previous. Powell was able to slip past Cook, moving into P3. Hawkins began to apply the pressure to Gilkes, having a brief look on the inside of the chicane. Powell caught Hawkins by surprise, breezing into second place. Hawkins dropped down to P5.

Cook and Kimilainen were battling it out for the bottom step of the podium. Kimilainen had the advantage briefly as they started the final lap, but ran wide and jumping over a kerb. This allowed Cook to retake the position.

Powell closed the gap to the race leader, getting right on her gearbox. Powell was looking for a way around, but just couldn’t from her way through. But got a brilliant exit out of the final corner and it turned into a drag race to the line and a photo-finish. It was Gilkes who narrowly took the victory by just 0.003 seconds. Cook completed the podium.