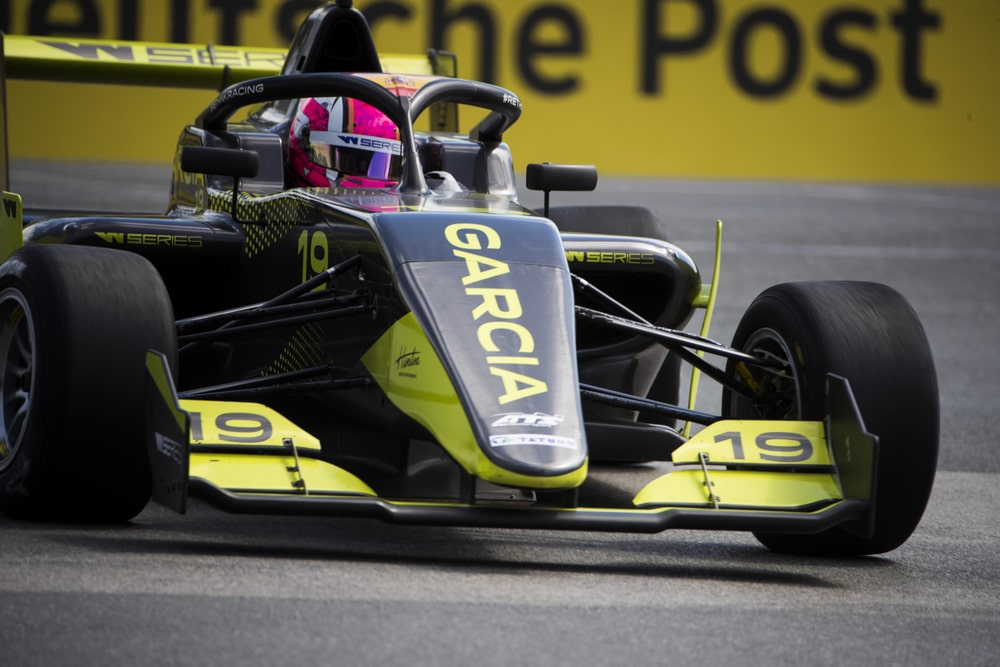 Marta Garcia won the fourth round of the W Series championship at Norisring in Germany. It’s the shortest circuit on the calendar, nearly half the length of the other circuits.

Jamie Chadwick had a poor start off the line, dropping behind Beitske Visser, her championship rival. Marta Garcia had a good start and was able to grow a huge lead to her competitors, pulling out a two-second gap within the first two laps.

Gosia Rdest suffered from front wing damage in the first corner of the race, after making contact with Fabienne Wohlwend on the exit of the hairpin. She was able to continue for nearly ten minutes before the officials forced her to pit for a new front wing.

Within the first five minutes, Sarah Moore skidded out of control when braking for the turn one hairpin, slamming into the side of Shea Holbrook. The accident also held up Vivien Kesthelyi, who had to brake because the cars were in her way.

Everyone was able to continue the race. Holbrook had to pit for a rear puncture, although some pit lane confusion forced her to drive through the pits and complete another lap before she was able to get a new tyre. Moore retired from the race a few minutes later after her front-right suspension failed under braking.

Garcia was stuck behind Rdest when she returned to the race with her fresh front wing. Garcia was able to put the pink car behind her, putting an obstacle between herself and the pursuing cars.

Both Rdest and Holbrook were given drive-through penalties for speeding in the pit lane, adding salt to their wounds.

At the halfway point of the race, Garcia had created a four-second lead over the chasing Visser. Chadwick was struggling for pace, dropping further behind Visser.

Emma Kimilainen began to put some pressure on Wohlwend in a battle for P4, as the time ticked down. Kimilainen was eager to impress after missing the other races of the season due to an injury in the first race. But she wasn’t able to get by before the end of the race, despite her best efforts.

With just two minutes remaining in the race, Alice Powell pulled into the pit lane to retire, ending a dismal weekend for the Brit. Jessica Hawkins also retired from the race.

With less than a minute remaining, Chadwick began challenging Visser to claw back some championship points. She wasn’t close enough to launch an attack on the final lap of the race, settling for the bottom step of the podium. Garcia topped the podium with a massive victory from pole position.

Chadwick still tops the W Series championship standings, with 83 points. Visser closes the gap slightly, now just 10 points behind her in P2. With the race win, Garcia reduces her gap to the championship leader by 10 points, with 23 now separating her from the lead.

With just two races remaining in the season, the next race will be at the TT Circuit Assen in The Netherlands on the weekend of July 20. It will be an experimental weekend for the championship, as they explore a double-header weekend. The first race on Saturday will be the regular championship race for points, but an additional race will be held on Sunday with a reversed grid. Drivers won’t score points for Sunday’s race, as the series explores a possible weekend format change for the future.