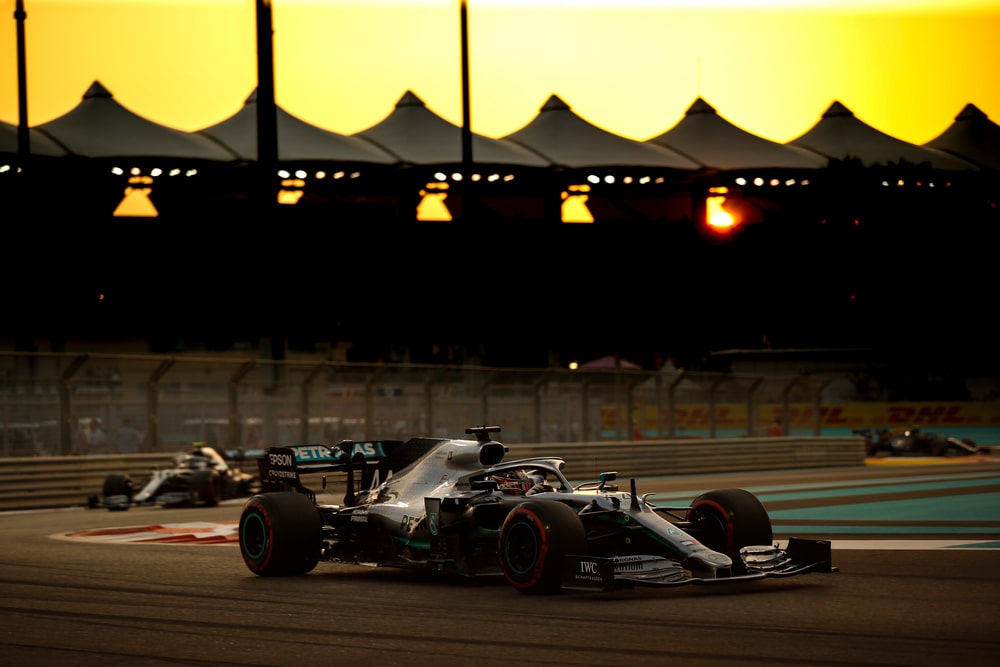 Hamilton ends the season on a high in Abu Dhabi

After months of racing around the world, the 2019 season came to a close with the FORMULA 1 ETIHAD AIRWAYS ABU DHABI GRAND PRIX 2019. It was a race with an unusual start that will surely spark a debate.

Ferrari landed themselves in hot water with the stewards before the race even began, with an investigation set for the end of the race. The amount of fuel declared by Ferrari was different than the amount of fuel measured by the stewards when Charles Leclerc left the garage, breaching the technical regulations.

At the start of the race, Lewis Hamilton had a good start off the line, maintaining his lead comfortably. The Red Bull of Max Verstappen had a slow start of the race, getting passed by Charles Leclerc on the long back straight and getting under pressure by Sebastian Vettel.

In the first corner, Lance Stroll bumped into Pierre Gasly, sending him into the rear of Sergio Perez. Gasly lost his front wing and needed to limp back to the pit lane for a new one. The stewards looked at the issue, but decided that no action was warranted.

Haters of the DRS got their dream race. The DRS was disabled by the FIA due to a technical issue. While this did hamper the performance of some drivers, there were some that were able to overtake using splistream instead.

Ferrari was the first of the lead teams to pit for new tyres, double stacking their drivers on lap 13. Leclerc changed to the hard compound tyres and just seconds later Sebastian Vettel parked in the pit box for a set of the same tyres. His pit stop was almost three times longer than his teammate’s, thanks to issues with both the front and rear left tyres.

Alexander Albon was the only other driver from the top three teams to pit for hard tyres this early in the race.

Without the DRS, a lot of the drivers got stuck in queues led by drivers who had yet to pit. Bottas, Vettel and Albon were stuck in a train behind Nico Hulkenberg for many laps.

After 18 laps without the DRS, the FIA was able to resolve the technical issue they were struggling with and enabled the DRS for the rest of the race. This allowed the queues to break apart and returned the race back to normal conditions.

Now free from the queue, Vettel was warned over the team radio about a potential power unit issue and his pace appeared to drop.

On lap 26, Verstappen pitted for hard tyres. Mercedes responded the following lap by calling Hamilton into the pit lane. Hamilton left the pits still in the lead of the race, while Verstappen came out behind Leclerc.

Shortly after his pit stop, Verstappen began to complain of a power unit problem. The team worked frantically on the pit wall to try and improve the issue, but there was little they could do.

Verstappen was losing time to Hamilton, but he was gaining rapidly on Leclerc, who was running on significantly older tyres. He dove on the inside of Leclerc into turn 8, making the overtake stick. But with DRS assistance, Leclerc was able to fight back around the outside of turn 11. Verstappen was able to hold onto the position.

On lap 39, Ferrari double stacked their drivers again. Leclerc pitted for soft tyres, rejoining the race in P3. Vettel pitted for medium tyres, dropping down to P6, behind Albon and Bottas.

Near the end of the race, Vettel was within striking distance on Albon. With just two laps remaining in the race, he was able to take the position and move into the top 5.

Bottas did his best to catch up to Leclerc, using all of the engine modes that his team gave to him. He was able to come close to the DRS range, but was not able to mount any attack on Leclerc before the checkered flag fell for the final time this season.

Hamilton finished the season strong with a victory. Verstappen stood along him on the podium with Charles Leclerc joining them on the bottom step, despite the post-race investigation hanging over his head.

With that, the 2019 season comes to an end. It will be a little more than a hundred days before the drivers will participate in another race weekend at Melbourne next Spring.