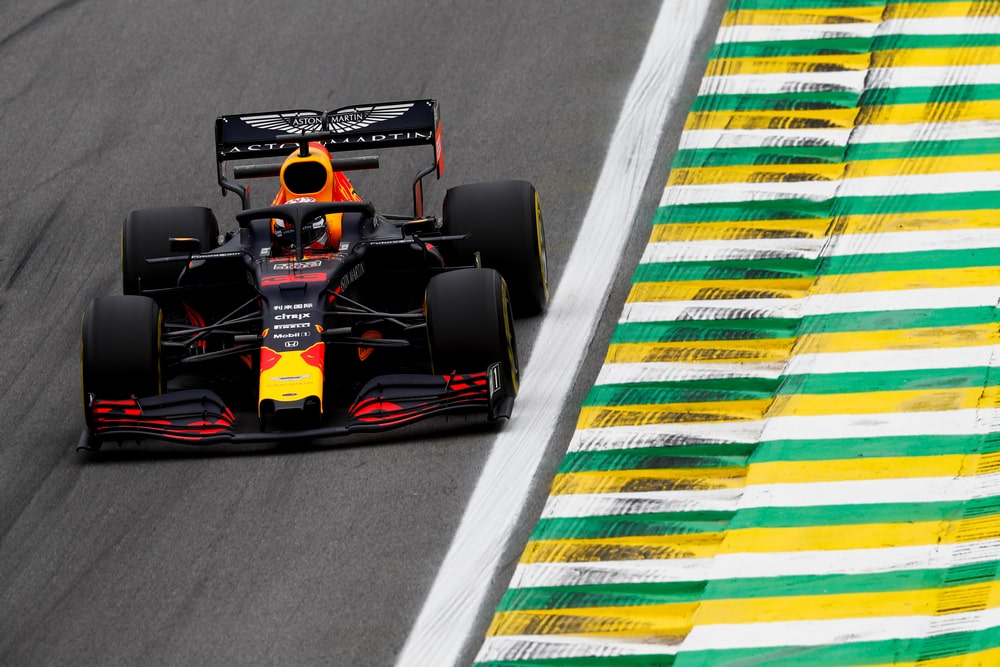 The teams were back on the Western side of the globe, in Brazil for the FORMULA 1 HEINEKEN GRANDE PRÊMIO DO BRASIL 2019. It was the penultimate round of the 2019 season. Although both championship titles have been decided already, everyone was still hungry for victory.

All of the leaders had a solid race start. Max Verstappen was able to maintain his lead from pole position. Sebastian Vettel tried to force Lewis Hamilton wide in the first corner, but he was able to get his Mercedes by around the outside and into P2.

Further back, Charles Leclerc began his charge through the field following his grid-penalty that landed him down in P14. By the end of the first lap, he had made his way up into P11 and then P10 by the time the DRS became available.

Lando Norris was quite aggressive at the start of the race, doing his best to defend against Leclerc and Daniel Ricciardo.

On lap 8, Ricciardo was chasing down Kevin Magnussen with some help with the DRS. He made a dive on the inside of turn 4. Magnussen left the space, but Ricciardo got on the kerb and locked up, sliding wide into the Haas. Magnussen spun and Ricciardo damaged his front wing. Both drivers were able to continue the race, although Ricciardo did need to pit. The incident was noted by the stewards and Ricciardo earned a five-second penalty.

It was a flawless stop by Red Bull, but Williams released Robert Kubica into Verstappen’s path at the pit exit. Verstappen was forced to slow down to avoid him. This incident caught the stewards’ attention, who gave Kubica a five-second time penalty for an unsafe release.

Verstappen’s misfortune combined with Hamilton’s strong outlap pace put Hamilton in front of Verstappen. Hamilton was struggling to get by Leclerc. He was finally able to get by the young Ferrari driver, but Verstappen didn’t have nearly as much difficulty getting past, allowing Verstappen to close the gap. Verstappen made a move on the inside of Hamilton into the first corner and there was nothing that he could do to prevent it.

Valtteri Bottas pitted for hard tyres on lap 27 in reaction to Sebastian Vettel’s pit stop. Vettel pitted the lap before for medium compound tyres. Charles Leclerc was in the pit lane for the hard compound tyres a few laps later.

Hamilton was unhappy with the soft compound tyres and there was not a lot of pace on the hard compound tyres. Mercedes decided to put both of their drivers onto the medium tyres. First they called in Bottas, who was originally forecast to finish the race on the hard tyres, on lap 42. Hamilton pitted the following lap.

Verstappen responded to Mercedes’ call, also changing to the medium tyres. He came back out into the race lead, but the gap to Hamilton was greatly reduced.

Bottas came to Leclerc on the slower hard compound tyres, but Bottas couldn’t get by. He made multiple attempts to get around Leclerc, but Leclerc did a good job defending his position. Temperatures became a concern for Mercedes. Eventually, Bottas’ engine couldn’t take it anymore and it blew up into a puff of smoke.

He parked alongside an access road just before turn 4. He was out of danger, but race control decided to deploy the safety car. This gave Verstappen the chance to pit for soft tyres, while Hamilton did the opposite to Verstappen.

When the race resumed on lap 60, Verstappen was able to comfortably sneak around the outside of Hamilton in the first corner. Alexander Albon did the same on Vettel in the same corner.

Vettel made some attempts to get by Albon, but couldn’t get by. He soon fell out of the DRS zone and into the clitches of his teammate. Leclerc passed Vettel in the first sector. Vettel fought back down the straight ahead of turn four. The two were wheel-to-wheel down the straight with Vettel on the right and Leclerc on the left. Vettel made a small move to the left and the two touched, turning a decent result into double a DNF for Ferrari.

Leclerc suffered a front-right puncture and Vette suffered a rear-left puncture. Both drivers failed to finish the race. The safety car was deployed.

The race resumed with just three laps left in the race. Verstappen zoomed comfortably into the lead of the race. Hamilton was battling Albon for the second step of the podium. Albon left the door open and Hamilton made a move on the inside, but spun Albon out of the podium position.

Hamilton damaged his front wing and Pierre Gasly was able to get by. Hamilton put up a fight and the two drag raced in the final sector to the finish line. Gasly narrowly took second position with Hamilton behind.

Next up will be the Abu Dhabi Grand Prix, the final race the season. The season will come to a close on the weekend of December 1.