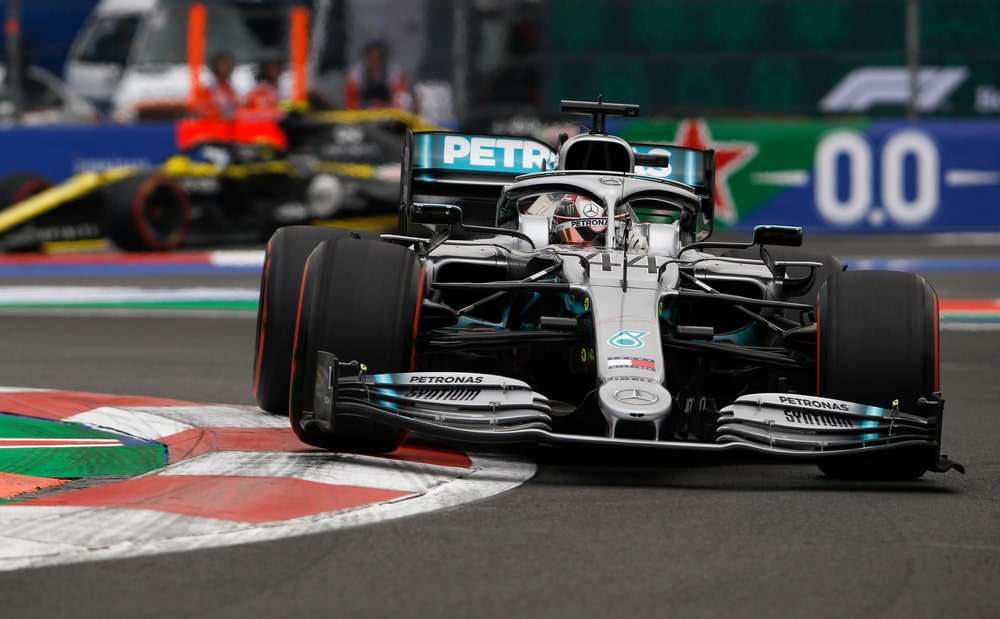 Hamilton wins in Mexico but fails to secure the title

The teams were in action in Mexico for the first race of a back-to-back weekend in North America. This weekend, it was the FORMULA 1 GRAN PREMIO DE MÉXICO 2019.

As predicted by many of the drivers, it was a chaotic opening lap of the race. Sebastian Vettel had a poor start from second on the grid. He moved to the left of the long straight to block Lewis Hamilton. Vettel forced Hamilton to back out of the move as he went over the grass that lines the circuit.

The two Ferrari teammates also had some minor drama when Vettel accidentally bumped the rear of Charles Leclerc’s car into the corner. Neither driver suffered any noticeable damage.

The first lap finished with a virtual safety car.

When the race resumed, Verstappen was battling with Valtteri Bottas. At the end of the fourth lap, Verstappen was able to get by Bottas with an aggressive overtake in the stadium section. In doing so, he made slight contact with the Mercedes and gave himself a right-rear puncture. Down the long main straight, his tyre shredded apart and a long limp back to the pit lane dropped him to the rear of the field. He pitted for the hard compound tyre.

Mercedes, who have become accustomed to running at the front of the field in recent years, seemed to struggle with cooling the brakes when running behind other cars.

Lando Norris’ race was ruined when he made a pit stop on lap 13. The mechanics didn’t secure the front-left tyre. Norris was able to stop before the pit exit line and the mechanics pushed him back to the pit box, but it cost a lot of time and dropped him to the back of the pack. The stewards looked at the incident.

Alexander Albon was the first of the top five to pit for tyres, diving into the pits on lap 15 for a set of medium tyres. This locked him into a two-stop pit strategy. He rejoined the race behind Carlos Sainz, who significantly held up the Red Bull, eliminating Red Bull’s undercut attempt on Vettel.

Ferrari responded, calling Leclerc into the pit lane from the lead of the race. He also took the medium tyres.

There was more pit lane drama, this time at the Alfa Romeo pit box. The mechanics didn’t tighten the right-rear tyre of Antonio Giovinazzi’s car. The jack was lowered, but the rear tyre fell off once the throttle was applied. The team jacked the rear of the car up again and put the tyre back on, but it did cost the team some time.

On lap 24, Max Verstappen made contact with Kevin Magnussen. Verstappen was on the inside of the corner and Magnussen turned in. Both drivers recovered with no serious damage. Magnussen ran out wide and slowly. Verstappen needed to leave the circuit to overtake the slow Haas around the outside. The stewards decided not to take action on the incident.

The same lap, Hamilton pitted for hard compound tyres. He came out behind the lapped Williams cars and Robert Kubica didn’t get out of the way as quickly as Hamilton would have liked. This slowed Hamilton on his out lap.

Ferrari didn’t respond to Hamilton’s pit stop, opting to leave Vettel at the lead of the race. Hamilton questioned the team’s strategy call, wondering if maybe the team stopped him too soon.

Vettel lost some time making his way through traffic, arriving at the battle for P12 at exactly the wrong time. Pierre Gasly and Carlos Sainz were scrapping for position, slowing down Vettel.

It took more than ten laps for Mercedes to decide to pit Bottas for hard compound tyres. He came into the pit lane on lap 37. Ferrari responded the following lap, covering off the undercut attempt from Bottas. He rejoined the race on the hard tyres behind Albon and Hamilton, both of which were likely to pit again.

Leclerc made his second and final planned pit stop on lap 44. It was too early in the race to fit the soft tyres and medium tyres would lock Leclerc into a three-stop strategy, so the team had to put on the hard tyres. There were problems with the right-rear tyre, losing the team around four seconds. Hamilton inherited the race lead.

Albon made his final pit stop the following lap, also taking the hard tyres and slotting into P5.

With 15 laps remaining in the race, Bottas began to apply some pressure to Vettel for P2 with some help from the DRS. Traffic was helping Vettel maintain the position because they were giving DRS to Vettel as well. On the Mercedes pit wall, the team was concerned about temperatures while running behind Vettel.

As the end of the race rapidly approached, Ferrari was expecting that Hamilton’s older tyres would drop off eventually, but that point never came. He was able to maintain a comfortable lead over the race and secure the top step of the podium.

Vettel and Bottas wrapped up the podium. Leclerc and Albon concluded the top five, while Verstappen finished the race in P6 after a fantastic recovery. Hamilton had the chance to secure his World Drivers’ Championship title in the race, but he wasn’t able to do so. He will likely do so next weekend.

The teams will be back in North America next weekend, this time in America for the United States Grand Prix at the Circuit of the Americas. This is the final back-to-back weekend of the season. The race will be held on November 3.