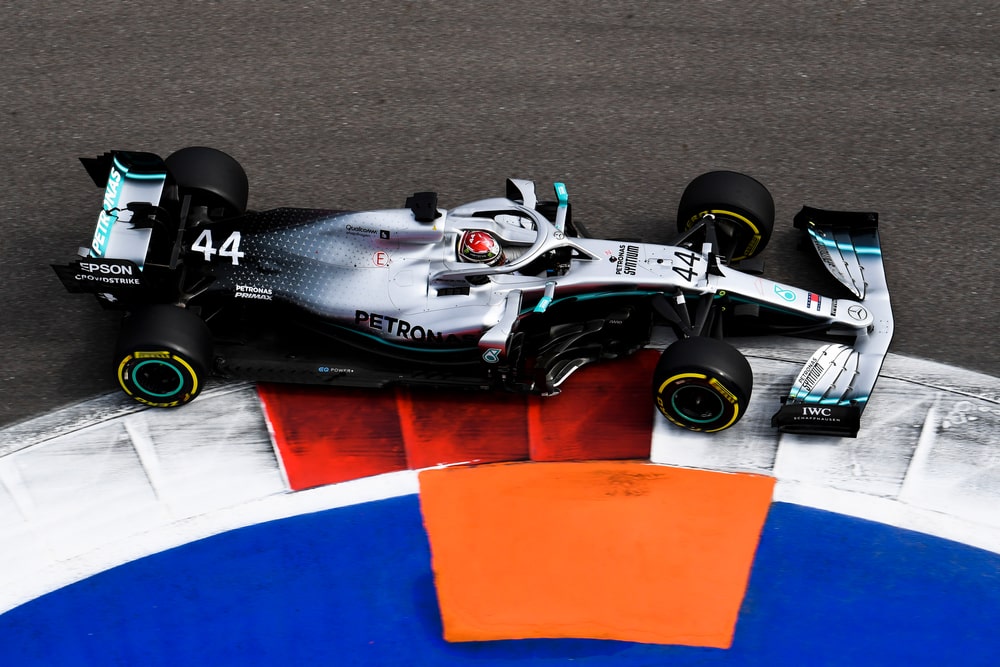 Just a week after Sebastian Vettel secured a victory in Singapore, he was in Russia looking to repeat that at the FORMULA 1 VTB RUSSIAN GRAND PRIX 2019. Mercedes were looking to preserve their flawless Russian Grand Prix record, while Charles Leclerc was looking to convert his pole position into a third career victory.

Mercedes and Ferrari lined up on the grid with two very different tyre strategies. Ferrari chose to start the race on the soft compound tyre, like the other cars in the top ten. Mercedes opted to take the medium tyres, giving them the option to run a stretch their first stint out a little longer.

Charles Leclerc took his position at the front of the grid for a whopping fourth consecutive time, being the first to do so since Lewis Hamilton at the end of 2016. But, when the lights went out, Leclerc’s lead didn’t last long.

Sebastian Vettel had a stunning start from third on the grid, closing in on his teammate and getting by him in the second corner. Carlos Sainz had an equally quick start from fifth on the grid. He battled with Lewis Hamilton for third position, but couldn’t get by.

The safety car was deployed at the end of the first lap to clear the wreckage of Romain Grosjean’s Haas. Grosjean was on the outside of Antonio Giovinazzi and Daniel Ricciardo into a corner, but three-wide didn’t end well. Ricciardo limped away with a rear puncture.

Kimi Raikkonen was given a drive-through penalty for a jump start.

The race resumed on lap 4. Shortly after the race restarted, Ferrari began to discuss a position swap to give the race lead back to Leclerc. But Vettel refused to do it, turning up the pace and leaving Leclerc in the dust. A frustrated Leclerc shared his feelings about the situation on the team radio.

Although it took quite a few laps, Max Verstappen was eventually able to climb up the order past both McLarens. He first overtook Lando Norris and then chased down Sainz for P5.

Leclerc was the first of the top five drivers to pit for new tyres, taking the medium compound tyres. Leclerc showed solid pace on the fresh rubber, taking the fastest lap of the race from Vettel. Ferrari held Vettel out for too long, waiting until lap 26 to pit for mediums.

It was too long to wait and Vettel was easily overtaken by Leclerc. In the end, it didn’t really matter. Vettel suffered from an engine failure the following lap and was forced to park alongside the circuit.

This ended up impacting Ferrari since the virtual safety car was deployed, allowing Hamilton and Bottas to benefit from a cheap pit stop and maintain the lead of the race. Both Mercedes cars took the soft tyres.

The VSC was short-lived. The full safety car was deployed when George Russell crashed into the barriers under the VSC conditions. He went head-on into the barriers, possibly due to a brake failure. To add salt to the wound for Williams, Robert Kubica parked in the garage.

Ferrari was forced to take advantage of the safety car and pit for a set of old soft tyres, dropping back to P3. Ferrari needed to take the soft tyres to match Mercedes’ compound.

The race resumed on lap 33. Hamilton pulled away at the front, which put Bottas outside of the DRS range. On the other hand, Leclerc was able to keep within the DRS range of Bottas. This put Bottas under a lot of pressure when the DRS was enabled a few laps later.

Despite the pressure, Bottas was able to fend off Leclerc and maintain the Mercedes 1-2 finish. Late in the race, Leclerc gave up on the charge in pursuit of the fastest lap point. But it was too much to ask and Hamilton kept that extra point.

He topped the podium alongside his teammate and Leclerc on the bottom step. With this win, Mercedes kept their perfect Russian Grand Prix record alive.

The teams and drivers will get to take a breather before they will need to be in Japan. The Japanese Grand Prix will be on the weekend of October 13.