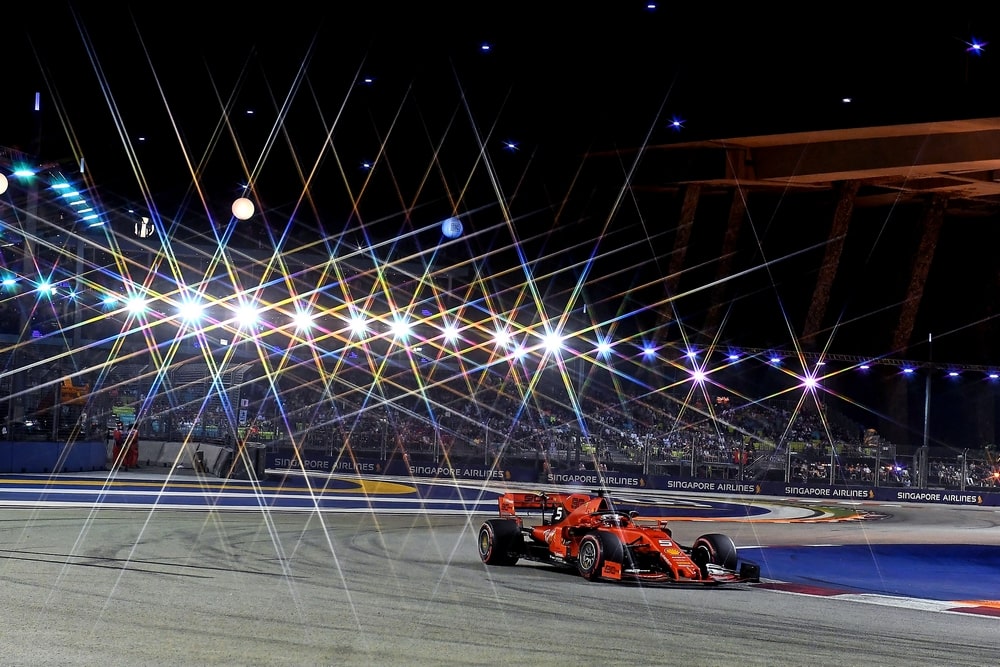 Two weeks after a back-to-back weekend, the teams were back at it again around the streets of Marina Bay for the FORMULA 1 SINGAPORE AIRLINES SINGAPORE GRAND PRIX 2019. It was a race that was heavily dependant on pit strategy, with Mercedes opting to take an unconventional strategy.

After a short time sitting on the starting grid, Charles Leclerc got away well and maintained his position in the lead. The rest of the top drivers were able to keep their position, despite Max Verstappen feeling some pressure from Valtteri Bottas in the first sequence of corners.

Further down the grid, Daniel Ricciardo went for an overtake on the inside, damaging the front wing of the Williams in the process. Russell had to pit for a new front wing. Carlos Sainz and Nico Hulkenberg also had to pit after a first-lap collision. Sainz turned into the corner but didn’t see Hulkenberg on the inside.

After the chaos of the race start subsided, things cooled down as the top drivers played the game of tyre conservation, slowing to a crawl. Drivers like Ricciardo, Kimi Raikkonen and Sergio Perez kept the fans entertained as they navigated through the field.

A quarter of the way through the race, the tyres started to reach the end of their competitive life and drivers near the back of the field started to filter into the pit lane for new tyres.

Sebastian Vettel and Max Verstappen were the first of the lead cars to dive into the pits, taking hard tyres on lap 20. Critically, Nico Hulkenberg divided the two drivers when they rejoined the race. This early pit stop for Vettel gave him the undercut on this teammate Leclerc when he pitted the following lap, handing Vettel the net lead of the race.

Mercedes took a strategic gamble with Lewis Hamilton, telling him to pit the opposite to Leclerc and keeping him in the race. Hamilton said the tyres feel good, but the pace wasn’t there against the younger tyres. The team was banking on the pursuing Ferrari drivers getting held up by the mid-field cars that hadn’t yet pitted. This included Antonio Giovinazzi, Pierre Gasly, Daniel Ricciardo and Lance Stroll. Hamilton had tons of clear air ahead.

Bottas pitted for fresh tyres on lap 23, opting for a more conventional strategy. He rejoined the race narrowly ahead of Hulkenberg and Albon, but well behind the net leaders ahead. As Hamilton’s tyres began to drop off a few laps later, Bottas was advised to manage his pace, opening up a gap ahead for Hamilton to fill.

As Vettel caught the mid-field cars, Hamilton couldn’t stay out any longer. His team was forced to abandon their strategy and accept the consequences. He rejoined the circuit ahead of his teammate but an eternity behind the net leaders.

The risky Mercedes strategy may not have panned out anyway, as Vettel did manage to slice his way through the traffic quite quickly. His teammate, who was understandably livid about losing the lead due to the Ferrari strategy, was eventually able to get by the traffic as well but he was six seconds behind his teammate and Verstappen was close on his tail.

The anticipated safety car arrived on lap 36 to allow marshals to recover a stricken Williams. Romain Grosjean and George Russell tangled in turn 8 when Grosjean attempted to overtake Russell around the outside of the corner. The two collided and Russell was spun into the outside wall. Grosjean carried on but did need to pit for repairs.

Ferrari decided to keep their drivers out of the pits, contrary to what many people (including the Mercedes engineers) were expecting. Doing so would have put their drivers behind Hamilton. The lengthy safety car period played into Ferrari’s hands, allowing the tyres to cool and extending their lifespan.

Leclerc took the opportunity to complain about the team strategy over the team radio, questioning their call to perform the undercut and hand Vettel the race lead. With the gap now closed to Vettel, Leclerc was undoubtedly ready to attack his teammate and retake his lead when the safety car left the track on lap 41.

The green flag period was relatively short-lived when Sergio Perez’s Racing Point came to a halt a few laps after the race had resumed. Perez was forced to park up trackside after a mechanical failure.

The race resumed again but once one safety car comes out, it seems it opens a flood gate for many more safety cars. The third safety car was to recover Kimi Raikkonen’s damaged car from the first corner with just over ten laps remaining in the race. Daniil Kvyat made a late dive on the inside of the first corner and Raikkonen turned into the corner. He likely didn’t see or expect the lunge from the Toro Rosso behind.

The car was recovered quickly and the race resumed with ten laps to go. Vettel caught the field sleeping, launching far earlier than he had the previous two restarts. This allowed him to reduce the risk of Leclerc taking the victory from him in the closing stages of the race.

Hamilton closed the gap to Verstappen with a couple of laps remaining in the race. However, the circuit proved difficult to overtake and Hamilton couldn’t get close enough to launch an attack.

Collecting his 53rd career victory, Vettel brought his 22 race dry spell to a close. It was his first race victory since Belgium last season. A frustrated Leclerc was forced to settle for the second step of the podium. Verstappen found himself the bottom step of the podium as Mercedes failed to make the podium for only the second time this season and just the eighth time in the hybrid era.

There will be little time for rest. The teams will need to make their way to Russia in time for next weekend’s Russian Grand Prix. The race will be on September 29 at the former site of the 2014 Winter Olympics.