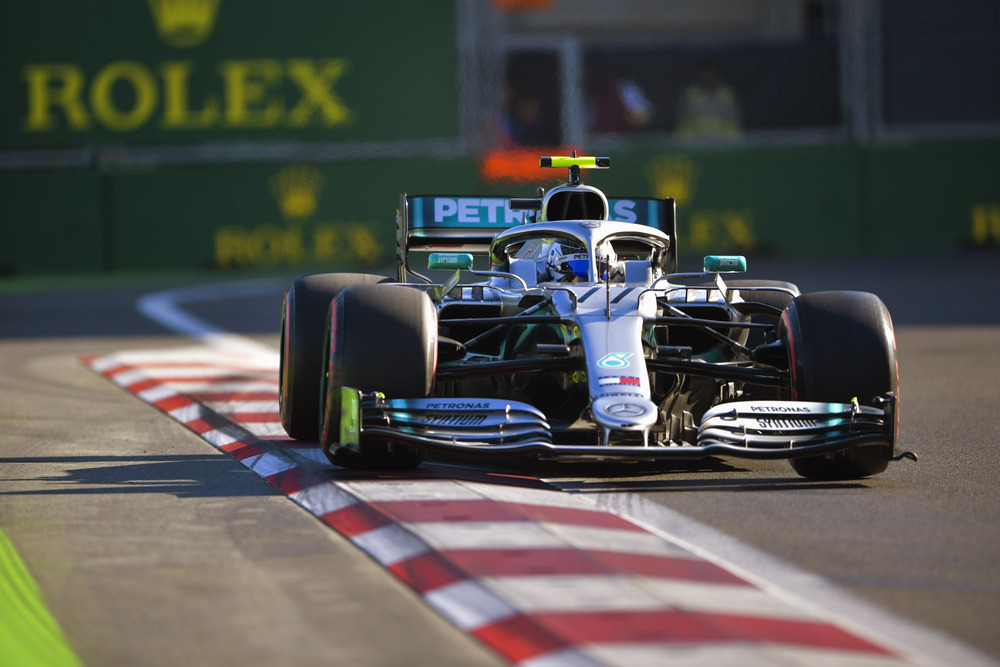 Bottas leads Mercedes to another 1-2 finish in Azerbaijan

The teams and drivers were in the narrow streets of Baku City for the FORMULA 1 AZERBAIJAN GRAND PRIX 2019 this weekend. The practice and qualifying sessions were filled with issues, including a crash for Leclerc in qualifying which put him in P8. With Mercedes dominating the season, Ferrari was in desperate need of a win.

When the race started, the two Mercedes drivers were wheel-to-wheel in the first corner from the front row of the grid. The entered the second corner side-by-side again, but Valtteri Bottas go a faster exit than his teammate, allowing him to maintain his race lead.

Further back, Sergio Perez was able to overtake Max Verstappen for P4 in the second corner of the opening lap. Perez was on the outside of the Red Bull in the first corner as well. It took six laps for Verstappen to regain the position, braking late into the first corner.

Kimi Raikkonen, after a decent recovery from a pit lane start, was the first driver to ditch the soft tyres on lap 7. He pitted for the medium tyres, swapping out his worn tyres.

After just 10 laps, Charles Leclerc was able to overtake Verstappen and earn P4, having started from P8 on the grid after crashing in qualifying. He was one of the few drivers to start on the medium compound tyres and was looking faster than everyone around him, including his teammate.

Ferrari was not about to hold up Leclerc’s charge, so they called Sebastian Vettel into the pits for new tyres when Leclerc began to get close. Mercedes responded to Ferrari’s strategy, giving race leader Bottas a fresh set of tyres. Hamilton mirrored Bottas the following lap, unleashing Leclerc to the lead. Verstappen was the last of the leaders on the soft tyres, changing to the mediums on lap 15.

Bottas was pushing hard, setting the fastest time on lap 18. But the team told him to slow down and preserve the tyres he was planning to take to the end. Hamilton didn’t get the memo, stealing the fastest lap the following lap and bettering it a lap later. The Mercedes team returned to the team radio, telling Bottas to start “reeling in” Leclerc, who had nearly a 10-second lead at this point.

Bottas was gaining time rapidly on the leading Ferrari, but Ferrari was not confident that the soft tyres could make it to the end of the race. By lap 30, the gap was down to a second, but Hamilton was also closing the gap to Bottas. Two laps later, Bottas was able to overtake the race leader with some DRS assistance. Hamilton followed through not long after.

With Leclerc’s tyres fading fast, a safety car would have been ideal for the young driver’s strategy. This was almost the case when both Daniel Ricciardo and Daniil Kvyat straight into the runoff zone of turn 3. Ricciardo had attempted to dive around the inside of the Toro Rosso, but locked up and couldn’t turn. Kvyat had no choice but to follow Ricciardo into the runoff to avoid a collision. While attempting to rejoin the circuit, Ricciardo reversed his car into Kvyat. Ricciardo retired with big rear damage and Kvyat eventually retired with massive floor damage.

The incident didn’t warrant a safety car but will be investigated by the stewards after the race. Back at the front of the race, Leclerc had to move over to let his teammate through. Ferrari finally called Leclerc into the pits for new tyres. He rejoined the race just behind Pierre Gasly but was eventually able to get by, although Gasly didn’t make it easy.

Just five laps later, Gasly was forced to park up at the side of the circuit with a loss of power. He was able to find a runoff area to park in, but the virtual safety car (VSC) was deployed.

It was business as usual when the VSC ended, with around 3-4 seconds the gap between each of the drivers in the top five except for Leclerc. Because of his pit strategy, Leclerc was a staggering 30 seconds behind Verstappen with less than 10 laps remaining in the race.

Ferrari was keen to take the fastest lap from Mercedes. With Leclerc too far back to take P4 and too far in front to lose P5, he went to the pit box to take a brand new set of soft tyres and make a late race push for the fastest lap.

Bottas took the fastest lap again and had gained DRS from lapped cars ahead, allowing him to bump Hamilton out of DRS range. But it didn’t matter, as Leclerc set a new lap record on the penultimate lap of the race.

With a fourth 1-2 finish for Mercedes this season, they further extended their lead in the World Constructors’ Championship title battle. Bottas retook the World Drivers’ Championship lead from his teammate, with just 1 point separating the duo now. Vettel wrapped up the podium, standing on the bottom step.

With the fourth round of the season now completed, the teams will be returning to the circuit at where they spent the winter testing their new cars. The FORMULA 1 EMIRATES GRAN PREMIO DE ESPAÑA 2019 will be held in two week’s time, on May 12.